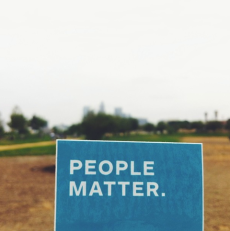 People matter.   I was talking with my sister recently about an important issue, and I said to her glibly, “I guess I should be talking to the folks that matter.”  Upon its utterance, I immediately corrected myself saying, “Well, everybody matters! To me, anyway.”  And just then, like Morgan Freeman’s character in “Bruce Almighty”, a man walked by and said with a beautiful big smile, “That’s right! Everybody matters!” He didn’t slow down, but pointed and kept smiling at me in approval.  People matter.

People matter.  Today, we find ourselves categorizing, stratifying, slicing and dicing folks into statistics and numbers, by ability, aptitude,  or mere words:  the 1%, the 99%, the talented 10th, low-mod-mid-high income, race, ethnicity, disabled, urban, suburban, at risk, wealthy, blue-blood, blue collar, white collar, illegals, conservative, liberal, C-Suite, earners, takers and on and on and on. Many corporations/governments/communities  take it a step further and make decisions on allowable percentage of “casualties.”  This language deliberately erases the faces of REAL MEN, WOMEN AND CHILDREN,  so that they are dehumanized and marginalized – therefore worthy of less treatment, less resources, less of everything;  even life itself.  Consider that the terms abortion and capital punishment sanitize the killing of human beings.   People matter.

People matter.  We matter because we are divinely created by the hand of God.  Psalms 139 tells us how intimately acquainted God is with everything about us, but in verse 14 it says:   “I praise You because I am fearfully and wonderfully made; Your works are wonderful, I know that full well”.   God’s invitation of relationship is extended to ALL of us – not just some.  He gives to EACH of us freely, as we are willing to receive.  We see His great love for us, when He gave everything He had through His son Jesus, so that we have restored and completely reconciled relationship with Him. People matter to God.  People matter.

People matter to me also because I saw that people mattered to my parents.  They extended themselves inconveniently many times to take care of a need, be a listening ear, a hand to hold, give counsel when needed.  People matter.

People matter. Resist the temptation to refer to PEOPLE as a number, statistic, a category, a group, an issue, a label, and instead,  put a fearfully and wonderfully made face on it and remember that EVERYBODY MATTERS.